MINDFULNESS IS A PATHLESS LAND 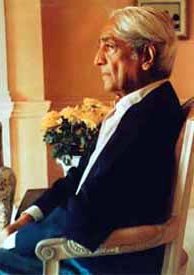 For much of my life I have fought an inner – and at times also an outer – battle of sorts as regards my attitude to, and participation in, religious bodies and organizations. To some extent, the battle is an ongoing one. It is this – should I, or should I not, involve myself in institutional religion? Part of me sees value in participating in the activities of organized religion and part of me doesn’t. It’s as simple as that.
Regular readers of my blogs and some of my other writings (eg this address here) would be aware that the teachings of Krishnamurti (pictured left) have had, and continue to have, a great impact upon my life and my thinking, and it was Krishnamurti who, in an historic and oft-quoted speech delivered at Ommen, Holland on 3 August 1929 proclaimed that religious organizations cannot lead us to Truth.
This is just a small part of what Krishnamurti had to say on that day:
I maintain that Truth is a pathless land, and you cannot approach it by any path whatsoever, by any religion, by any sect. That is my point of view, and I adhere to that absolutely and unconditionally. Truth, being limitless, unconditioned, unapproachable by any path whatsoever, cannot be organised; nor should any organization be formed to lead or to coerce people along any particular path.
The statement, ‘Truth is a pathless land,’ has always troubled me. What does it mean? If there is ‘land,’ it must surely be possible for there to be, or to create, one or more paths over that land. Of course, it always occurred to me that Krishnamurti was speaking metaphorically, but what did he actually mean? Well, it was only recently that I read what follows:
Truth is perfect and complete in itself. It is not something newly discovered; it has always existed.
Truth is not far away; it is ever present. It is not something to be attained since not one of your steps leads away from it. 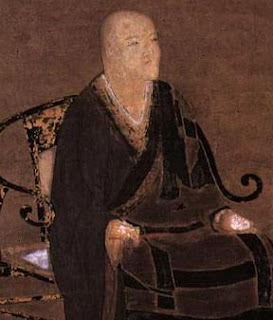 The great Zen master Dōgen (pictured right) wrote those lines. Reading them was an epiphany for me. It is quite likely that I had read them before, but reading them recently was a real ‘awakening’ for me. Truth is ‘not far away’ but ‘ever present.’ Further, it is ‘not something to be attained’ because  ... yes, you are Truth in the sense that Life is Truth, and you are an integral part of Life’s Self-expression or Interbeing. Life cannot other than be. You cannot be less than life. Never.
That’s it. There is no path. There is no need for a path. There is nowhere to 'go.' You are already 'there.' That is why some Buddhists speak of the ‘ever-present Buddha Nature,' the ‘ever-present Buddha Mind,’ and the 'Ever-Present Buddha.' That is why some progressive and esoteric Christians speak of the 'Cosmic Christ,' the 'Mystic Christ,' and the 'Living [or Master] Christ' (as opposed to the historical Jesus). The words don’t matter a damn. What is being described, among other things, is a state of being in which there is an emptiness of what has been referred to as ‘self-nature.’ We move from a ‘sense of self’ to a ‘sense of Being’ ...and even to a sense of Non-Being, difficult though that may be to understand. Indeed, it is incapable of being understood or described in a rational sense ... but it can be experienced. How? Well, by the regular practice of mindfulness. That's one way.
Mindfulness involves the choiceless awareness of what is ... from one moment to the next. Mindfulness is a conscious participation in the livingness of life in the recognition that Life is manifesting itself at all times in you ... and as you.
Now, having said all that, is there any place at all for organized religion? In my view, yes. If Truth is everywhere present – and even Krishnamurti acknowledged that – then it must be capable of being ‘experienced’ (if that be the right word, and I suspect it isn’t) in religious organizations and the like. You cannot be less than Life or Truth ... wherever you are or go. Further, participating in the rites, ceremonies and rituals of organized religion can be quite transformative if one approaches it in the right frame of mind.
However, we need to be very careful here, because it seems inherent in the nature of organized religion – or perhaps in those who occupy positions of religious authority and power – for there to be a tendency to assert that Truth lies outside of us when, as I see it, we are the embodiment of Truth. 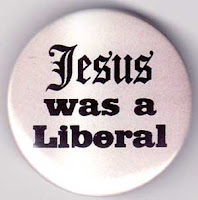 I know what I am now going to say is heresy to conservative Bible-believing Christians, but I don’t care. I am proud to be a heretic, and I don’t mind being called one. You see, the word ‘heretic’ comes from a Greek word meaning ‘one who chooses.’ I choose to be different. I choose to affirm what, in good conscience, I see as the true position in relation to any matter. As I see it, Jesus was a heretic as well, which is one of the reasons people rose up against him. Now, Jesus’ purported utterance, ‘I and the Father are one’ (Jn 10:30) [TNIV], is not an expression of his being, or claiming to be, God or the Son of God in a unique or exclusive sense. No, that is not how I see it. To me, Jesus is saying, in effect, ‘I am one with life itself – the very ground of being. There is no separation between the person that I am and the source and fountainhead of life itself. Not one of my steps leads away from life, which is truth.’

The difference between Jesus and most of us is that he was fully and mindfully aware of his true spiritual identity – at all times and in all places. For the most part, we live and act mindlessly ... and are thus only half-alive at best.
Mindfulness is a state of ‘at-one-ment’ with Truth ... that is, with all that is. Mindfulness is a 'pathless land.'
RELATED POSTS
KRISHNAMURTI AND THE TRUE ESSENCE OF MINDFULNESS
NANSEN KILLS A CAT
THE MINDFUL MIND OF NO-MIND
YOU ARE ON THE OTHER SIDE