Recently I spent a week or so in Japan, meeting up again with some very dear Japanese friends of mine with whom I have been associated in a certain Buddhist denomination.

As was the case on my trip to Japan last year, I was once again the constant recipient of much love and great kindness.

Last year---as well as on this most recent occasion---I met up with a remarkable 86-year old Japanese man, Isao [pictured left, with daughter Sonomi], and his lovely wife Takeko.

Isao, a former school teacher, said this to me on my most recent trip to Japan:

Each day Isao, a haijin (that is, a haiku poet or master), writes at least one piece of haiku. Whilst we were having tea together in a coffee shop, on my last day in Japan, he suddenly called for a piece of writing paper on which to inscribe a piece of haiku which had just come to him---in the magic of the moment.

This is the poem Isao wrote, quick as a flash, at the coffee shop: 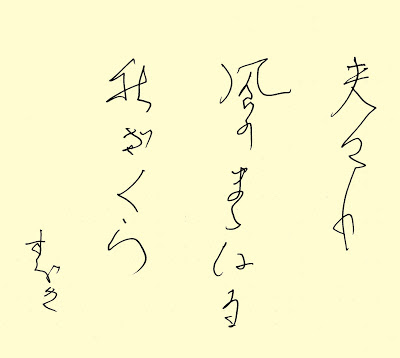 The poem, translated into English, goes something like this:

With the influence of the wind
Each flower of cosmos will come
Out by each different way. 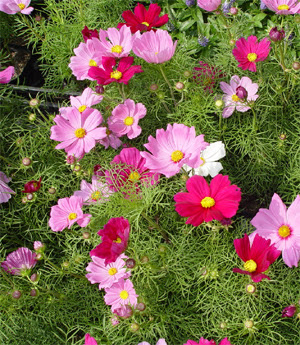 Haiku is both a form of Japanese poetry as well as a spiritual practice that has managed to find its way into numerous religious and spiritual traditions including Christianity. Haiku is also a way of living mindfully, letting---please note that important operative word---the very livingness of life, in all its concrete directness and immediacy, to write itself. A ku is said to be the shortest sequence or set of words equal or corresponding to a complete thought. The word hai means playful or amusing, and also rambling (here, in the sense of writing as one feels inclined). Haiku describes, with choiceless (that is, non-judgmental and non-analytical [hence, very few adjectives, adverbs and other modifiying words]) awareness, the here-and-now---that is, that which is truly real.

Haiku---called hokku in the 17th century (and also called haikai)---was 'invented' by Buddhist monks who quite ingeniously combined, among other things, Buddhist, Confucian and Daoist thought in order to arrive at a means whereby words---despite their inherent limitations---could get as close as possible to saying what is truly real. One famous Japanese haiku poet Bashō (1644-1694), who found the sacred, the holy or the divine in nature, captured the very heart and essence of haiku and mindful living---the two are really one and the same---in these wonderful oft-quoted words:

'Go to the pine if you want to learn about the pine, or the bamboo if you want to learn about the bamboo. And in doing so, you must leave your subjective preoccupation with yourself. Your poetry issues of its own accord when you and the object have become one---when you have plunged deep enough into the object to see something like a hidden glimmering there. However well-phrased your poetry may be, if the object and yourself are separate---then your poetry is not true poetry but a semblance of the real thing.' 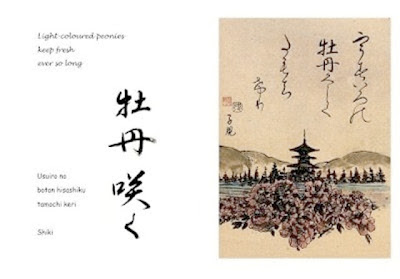 As a form of Japanese poetry---and a very short form at that, always using a bare minimum of words---haiku is typically characterised (at least in its more traditional form) by four ordinarily readily discernible features, all four of which combine to ensure that any haiku records a direct and immediate experience of life:

I should mention that more modern Japanese haiku are less likely to follow the tradition of 17 on or to take nature as their subject, but the use of juxtaposition as described above generally continues. 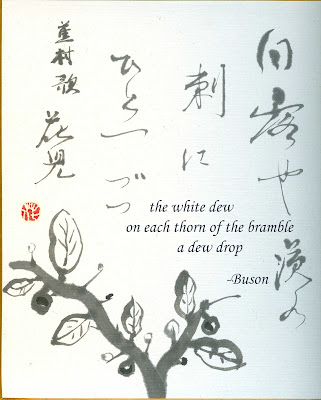 Here’s a good example of the literary form, translated into English, from the original lines penned by one of Japan’s greatest exponents of the form, the poet and painter Buson (1716-1784) [pictured below right]:

Ears of my old age;
The summer rains
Falling down the rain-pipe. As a spiritual practice---and a way of life---haiku is the creative and experiential essence of the practice of mindfulness, with all its concrete directness and immediacy. As such, haiku superbly captures the extraordinary in the ordinary and sometimes mundane events and things of everyday life, and the writing of haiku helps to sharpen one's direct, unmediated and uninterrupted awareness of life unfolding naturally---please note that word---from moment to moment.

Buson, mentioned above, is my favourite traditional haiku poet, for as I see it there has been no one better at capturing---for all time---the directness and immediacy of things-as-they-happen, and, perhaps more significantly, things-as-they-change, from one moment to the next. A good, well-written haiku cuts or pierces through the heart of reality, preserving for all time, but forever re-presenting, the actuality of some specific, perhaps now long-gone moment in spacetime.

Arguably, haiku---which is meant to be heard more than it is to be read--- is best written right after experiencing the event or happening the subject of the poem, with the juxtaposed images being directly observed everyday objects or occurrences, but that does not necessarily have to be the case. Also, as my friend Isao mentioned to me in Japan, haiku should be written having in mind the anticipated effect or impact on the reader. At least that is how he sees it.

Take, for example, this haiku of Buson, which, quite typically, contains two descriptive juxtaposed images (separated by a cut or kire) with a dramatic and sometimes totally unexpected ‘conclusion’:

The slanting sun:
The shadow of a hill with a deer on it
Enters the temple gate.

The coolness:
The voice of the bell
As it leaves the bell!

There are no firm rules for writing haiku in English. Strictly speaking, any writing of haiku in English is nothing more than an English imitation of a haiku. Certainly, there is no strict syllable (or the like) count as is found in traditional Japanese haiku---the Japanese monosyllabic phonetic system is clearly an advantage over the English system (at least for creating a sense of heightened directness and immediacy)---and there are no seasonal words as such in English, but many (but by no means all) writers of haiku in English limit themselves to 3 (or sometimes fewer) lines---roughly replicating the Japanese 3-part structure---of up to (but not necessarily) 17 syllables and generally include a cut or kire (sometimes in the form of a punctuation mark such as a dash or ellipsis, or an implied break, because English has no direct equivalent for the kireji) to contrast two distinct but often interconnected images. The important thing, it is said, is to try to replicate, or at least imitate, the ‘spirit’ of Japanese haiku. Brevity, directness, and immediacy are the hallmarks.

I promised Isao that I would write and send him some haiku in English. Here is my first, perhaps feeble, attempt:

The hot morning sun;
Romeo the ginger cat
Hisses at the dog. 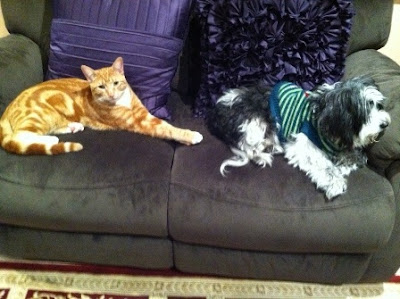 JAPAN, THE DALAI LAMA, THE QUEEN MOTHER, A MOTOR VEHICLE ... AND MINDFULNESS

THE CALLIGRAPHY OF MINDFULNESS

PIERCING THE MOMENT WITH MINDFULNESS

SHINTO---OR LIVING MINDFULLY WITH THE KAMI 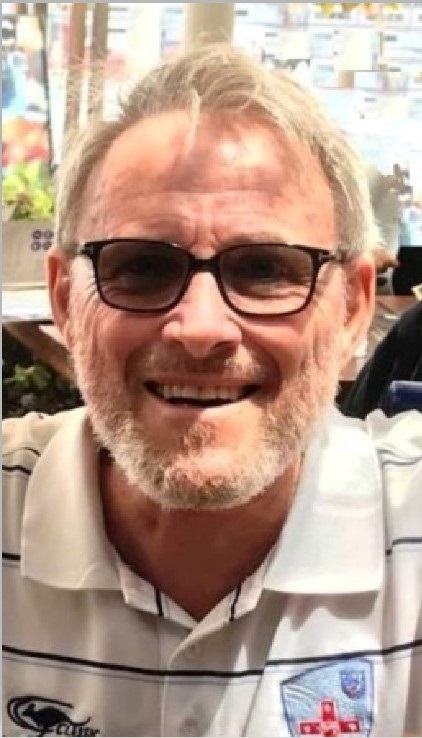