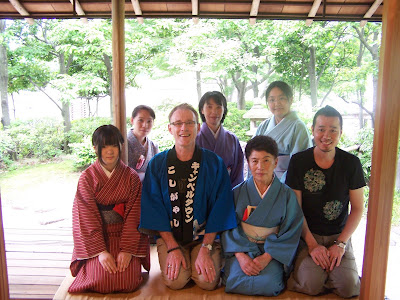 Whilst in Japan recently I was fortunate enough to be present at a Japanese tea ceremony (chanoyu, sado or simply ocha in Japanese).

Tea was originally brought to Japan in the 9th century by the Buddhist monk Eichū (743-816) who had returned to Japan from China.


The Japanese Tea Ceremony (also known as ‘the Way of Tea’) has its spiritual roots, at least in part, in Zen Buddhism as well as in Daoism, and especially in the Daoist influences upon Zen. The ceremony is a traditional and very beautiful Japanese choreographic ritual – one which is cultural, artistic (for the whole ceremony is viewed as a work of art) and spiritual – in which tea is prepared and served with careful attention to all details. It is a good example of what has been called ‘mindfulness through ritual’. 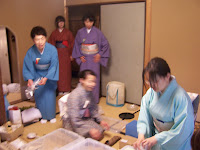 A lot of preparation goes into a Japanese tea ceremony. The host of the tea ceremony must give due consideration to all aspects of the ceremony including such matters as flower arranging, the kind of clothing (namely, kimono) to wear, appropriate art, special calligraphy [see below], and food. Traditionally, one to three (but sometimes more) guests are invited. The guests arrive and enter a special place for the tea ceremony.

﻿Here are some photos of the tea house in which the ceremony which I attended was held.

The tea house is situated in a beautiful Japanese-style public garden, which, in its highly ordered and formal fashion, itself has its roots in Zen.

The sole purpose of a tea house, which is specially designed and designated ('consecrated', in a Western sense), is to serve as a retreat for the making and drinking of the tea and the associated food. The tea house is and becomes a sanctuary from the worries, hassles and vexations of the outer world. It is a special place where one can consecrate oneself to what has been called the 'undisturbed adoration of the beautiful'.

Both the exterior and interior of the tea house, as well as the path leading to the tea house, are important in helping to set the desired mood – one of order, balance (most notably between the yin of the water and the yang of the fire used to warm it [cf Daoism]), harmony, simplicity, freedom from vulgarity, tranquility and equanimity.

I mentioned above that the Japanese tea ceremony has spiritual roots in Daoism and Zen. (Ikkyu, who revitalized Zen in the 15th century, apparently had a profound influence on the ceremony.) Now, according to Zen the whole universe cen be experienced in the drinking of a single bowl of tea. The experience of making and drinking tea - like everything else for that matter - comes from giving oneself over totally to the here and now and fully participating in the activity with a heart free from selfish thoughts and desires.

As regards the actual conduct of the tea ceremony, the guests are ordinarily welcomed only with a bow. No words are spoken. After the guests are seated, the host makes the beverage. Powdered green tea (matcha), which was introduced into Japan by Eisai, another Buddhist monk returning from China, in the 12th century, and which sprouts from the same plant as black tea but is unfermented and ground, is placed in a tea bowl, hot water is added, and a bamboo whisk is used to stir the mixture into a frothy brew.

Thin tea is served to each guest in an individual ceramic bowl, while one bowl of thick tea is shared among several guests. A sweet dessert is served as well and is consumed more-or-less contemporaneously with the drinking of the tea (which, itself, can be a bit bitter). 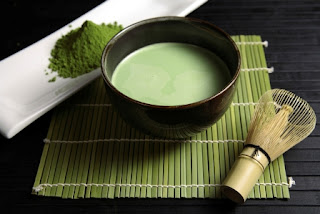 The bowl is passed to the most important guest, who bows to the host upon receiving the tea, takes the bowl with their right hand, places the bowl in the palm of their left hand, looks at the bowl, holds and turns the bowl in the 'prescribed' manner (ordinarily thrice clockwise [cf the triple gem?, the three marks of existence?], but not uncommonly just once [i.e. 180 degrees] clockwise), and raises it up, being careful to observe the foot as well as the interior shape. This act is performed to pay homage to both the object and its maker. The guest drinks some tea and then wipes the rim of the bowl, turns the bowl counter-clockwise, and passes the bowl to the next guest (or, if there be no next guest, returns it to the host). 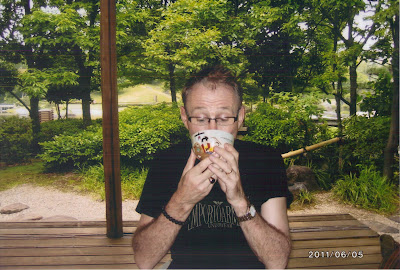 The Japanese tea ceremony is a 'transformative practice' characterised by such qualities as humility, simplicity, restraint, purity, harmony ... and naturalism. (As regards the latter, the host tries to keep to the natural state of things as much as possible.) Every action is performed carefully, deliberately and consciously ... with alertness and awareness (that is, mindfully, for a wandering mind leads to mistakes in 'form' (kata)) ... and with that additional element of curiosity, even anticipation, as regards what is happening from one moment to the next.

What was especially beautiful about the ceremony I attended was the fact that, although there was careful attention to detail and form, every action appeared to be done with typically Buddhist lovingkindness and compassion. You see, the whole 'process' involved in the tea ceremony is not about drinking tea per se but aesthetics and spirituality ... and preparing a bowl of tea from one's heart. In that regard, the host of the ceremony always considers the guests ... with every gesture and movement.

I mentioned above the word 'harmony'. Yes, every element of the ceremony, and every movement in it, points to and elucidates the serenity of the whole. The ceremony is an object lesson and a living symbol, that is, it not only ‘symbolises’, ‘represents’ or ‘stands for’ something else (the ‘inner reality’), it actually is instrumental in bringing about that reality. It is what has been referred to as ‘concretized truth’. Powerful stuff. 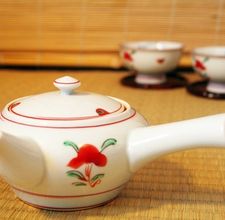 The tea ceremony affords numerous opportunities for reflection and quiet contemplation, and is a virtual microcosm of the order that Japanese see in their world.

The Japanese are mindfully aware of the fact - so often overlooked by Westerners - that every human encounter is a singular occasion which will never recur in exactly the same way. Accordingly, every aspect of the tea ceremony - the spiritual world of tea - is savoured ... and mindfully experienced.

Ritual, if done the 'right' way and with the 'right' intent, can be very empowering, indeed transformative. Ritual can take us to a 'sacred' realm beyond time and space.

I was pleased to see some young Japanese women participating in the actual tea ceremony itself - a ceremony which has an ancient and almost otherworldly character about it. It is essential that rituals of this kind be preserved for future generations.

JAPAN, THE DALAI LAMA, THE QUEEN MOTHER, A MOTOR VEHICLE ... AND MINDFULNESS

SHINTO---OR LIVING MINDFULLY WITH THE KAMI