I also love Zen, and although I prize reason and logic above almost everything else I will readily admit that truth – that is, reality – cannot be grasped by rational analysis. Truth, and the experience of truth, are entirely a matter of direct experience. Once you start analysing truth, you are in the realm of ideas and opinions – you have ceased to be in direct contact with truth itself! 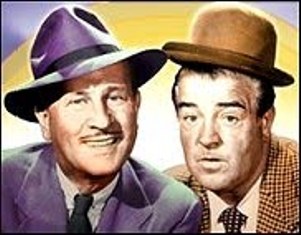 Now, back to A&C. I don’t want to make the boys out to be more cerebral or learned than they were – or weren’t – but their old burlesque routines have a Zen-like quality to them. That’s undeniable. Take Bud Abbott. He would lay out before Lou Costello a set of propositions that seemed logical – I say, ‘seemed’ logical ... in an illogical sort of way. Of course, on close examination and analysis – indeed, often at first glance – these propositions were demonstrably and self-evidently fallacious, even foolish ... just like Zen kōans.

These comedic kōans of A&C – just like their Zen counterparts – are not to be subjected to rational analysis. Those who find A&C unfunny tend to do just that. They listen to, say, ‘Who's on First?’ and say, ‘That’s silly!’ ‘Indeed,’ I retort, ‘but you miss the point.’ 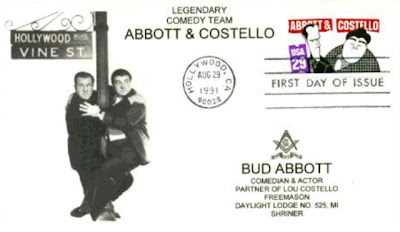 Take, for example, this brief portion of an old A&C burlesque routine: That’s very reminiscent of the old Buddhist story, ‘You are on the other side.’ I did a previous blog on that one.

Then there’s this A&C old chestnut:

BA: Now I am going to ask you one more question. Say you’re in the Grand Central depot [sic] in New York City. You buy a ticket. Where are you going?
LC: I’m not going anywhere.
BA: Then what are you buying a ticket for?
LC: I’m not buying any ticket!
BA: Then why are you in the depot?
LC: You put me in there!

After a few more frustrating moments, the routine continues along these lines ...

Then there's the 'Hole in the Wall' routine---written and copyrighted by the boys themselves---part of which goes like this:

You can almost hear Zen Master Abbott say, 'And while you're at it, show me your original face before you were born.' 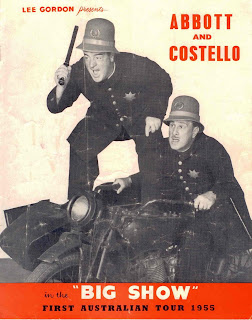 Silly? Yes. Corny? Yes, that too. But I still think they are very clever ... and very funny. Like Zen kōans these old comedy routines have a way of breaking through everyday consciousness. In defying both logic and rational analysis, they afford a new insight into ... truth!

Never forget this. Truth defies both logic and rational analysis. Truth just is ... and we are in direct contact with it at all times. It’s just that all too often we are mindlessly unaware of that fact. So, don’t be like Lou Costello. Stop struggling. Stop trying to understand. There is nothing to understand. Just be choicelessly aware of whatever unfolds from one moment to the next. You can do no better than that!

In June 1955 Bud Abbott and Lou Costello toured Australia (program cover pictured above left)---for their first and only time---performing in stadiums in Newcastle and Sydney, New South Wales and Brisbane, Queensland, and at the beautiful Palais Theatre in St Kilda, Melbourne, Victoria. (I've read that a man---most likely the legendary American-born promoter Lee Gordon---had turned up in the office of A&C's manager with $100,000 in cash tucked in a briefcase, which was the boys if they'd agree to doing 5 shows down under. Now, how could the boys refuse paying Australia a visit? I've also read that the boys supposedly lost the equivalent of their entire tour fee as a result of paying poker with the equally legendary radio personality Jack Davey. So wrote Max Moore, Gordon's sometime business associate, and the tour manager, in his 2003 autobiography Some Days are Diamonds.) 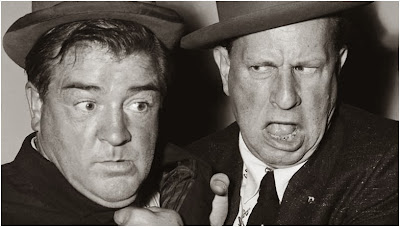 The boys arriving at the airport in Sydney, Australia in 1955 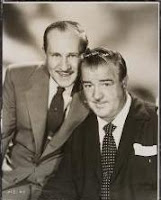 I wish my parents had taken me to see the boys perform at the old Sydney Stadium at Rushcutters Bay, but as I was then only 3 months old, I guess my parents knew best. The well-known Australian actor, comedian, writer and director Grahame Bond AM has written in his autobiography Jack of All Trades: Mistress of One about his fond memories of his parents taking him (at age 11) to see A&C perform at the old Sydney Stadium:

Even today I can visualise them standing on that tatty old stage with two microphones and no props, performing one of the most exquisitely written routines of all time, 'Who’s on First?'

(Clive James has different memories of A&C performing in Sydney. Each to his own.)

Earlier this year The Courier Mail ran a story on the team's adventures in Brisbane and dragged some old photos out of the archives which they presented, with narration, in this video format:

Not only did ragging students give the boys a bad time in Brisbane, forcing them to have to cancel some engagements to give themselves a chance to recover, but they also made headlines offstage in Sydney as well, when the car in which they were passengers hit a concrete-mixing truck on Sydney's Pyrmont Bridge. A&C were only slightly injured. Here's another small piece of memorabilia trivia from the boys' 1955 down under tour. When they were just about to board a flight back for the States at Sydney Airport some Aussie presented them with a real, live baby kangaroo to take home with them. Naturally, the boys were unable to do so, and they were quite disappointed.

The boys' two Brisbane Stadium shows each had an audience of 3,000-plus, which was very good for those days. Their shows at the Sydney Stadium were less successful. The Newcastle show---a tryout, so to speak, for the capital city shows---went well and has been labelled a hit. Melbourne was okay, all things considered. The bottom line---the boys' Australian tour was not a great financial success for promoter Lee Gordon, who also lost money that year bringing out to Australia other American entertainers including Betty Hutton and Bob Hope. One of the main reasons for A&C not drawing really big crowds related to timing---and demographics. It would not be until after television came to Australia---that happened in September the following year---that a whole new generation of fans (mainly kids) would discover A&C. By 1955 the boys' more mature (and largely young adult) fan base was more interested in setting up home in suburbia and starting a family. Still, A&C did manage to attract a large amount of media attention when they were in Australia, and a number of major newspapers ran feature stories on the boys and their careers. 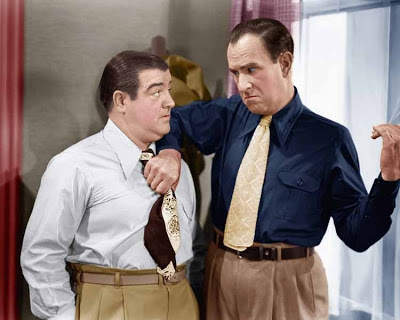 As I see it, A&C were comedic Zen masters. Take this famous routine, 'You're 40, She's 10', which has all the paradoxical elements of the best Zen kōan:


BA: You’re 40 years-old and you’re in love with this little girl that’s 10 years-old. You’re four times as old as that girl and you couldn’t marry her, could you?


LC: Not unless I come from the mountains.


BA: Yes, yes. Now here’s the question. How long do you have to wait until you and that little girl are the same age?


LC: Now what kinda question is that? That’s ridiculous!


BA: Ridiculous or not, answer the question.


LC: If I wait for that girl she’ll pass me up. She’ll wind up older than I am.


BA: What are you talking about?


BA: Why should she wait for you?


LC: I was nice enough to wait for her!


Now, if you’re still with me, here are A&C performing their most famous routine, 'Who's on First?’ – a routine which in 1999 was declared by Time magazine to be not only the '20th Century's Best Comedy Routine' but also the 'Routine of the Millennium', and which has been translated into nearly 30 languages, some of them even done and recorded by A&C themselves: 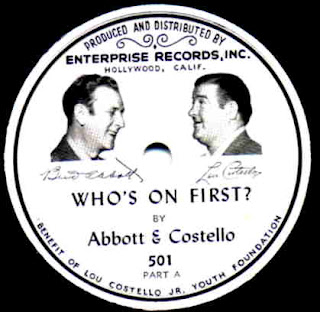 ABBOTT AND COSTELLO ON MINDFULNESS

ME AND MY SHADOW ... ALL ALONE AND FEELIN' BLUE

YOU ARE ON THE OTHER SIDE

Grateful Acknowledgments
Acknowledgments are made to the Estates of the Late Bud Abbott and the Late Lou Costello in respect of copyrighted, trademarked and other controlled material of the Estates. All rights reserved. The licensable images of Abbott and Costello, the routine ‘Who's on First’ and other routines and materials of and by Abbott and Costello are controlled material of the above mentioned Estates. The video clip (courtesy YouTube) and the excerpted routines as presented in this blog are for entertainment, nonprofit and non-commercial purposes only. There is no intention to infringe copyright or any other controlled material. This blog, and the blog site itself, are solely for informational and educational purposes that are entirely nonprofit and non-commercial in nature, intent and actuality. 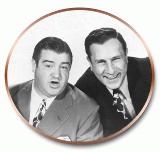