BE NOT DETAINED: DON’T LET YOUR MIND STOP 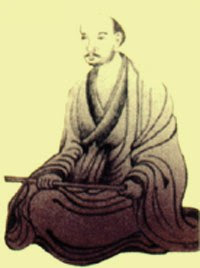 In my most recent post I quoted from The Unfettered Mind: Writings of the Zen Master to the Sword Master, by the Japanese Zen monk, calligrapher, painter, poet and master of the tea ceremony Takuan Sōhō (pictured left, as well as below right).

Sōhō is remembered for a number of good reasons, one of the more important ones being this---he fused the art of swordsmanship with Zen ritual, inspiring many swordsmen of the Tokugawa (or Edo) period (1603–1868). Most importantly, Sōhō had a number of Samurai students to whom he taught the art of swordsmanship primarily through the means of meditation. In particular, he taught swordsmen how to enter into a seemingly timeless state where they could be aware of what was happening in more-or-less slow motion such that they could then respond to any exigency with complete and unerring accuracy.

I urge you to read the The Unfettered Mind, copies of which can be found online on various sites. You may not have any interest in martial arts, Zen, or Eastern spirituality generally, but if you are in any way interested in self-development and self-improvement you will find much that is valuable in the book.

Now, much of the book is devoted to stressing the importance of what is referred to by Sōhō as a ‘non-stopping’, ‘correct’, ‘right’, ‘immovable’ mind of ‘No-Mind’. Such a mind is clear and tranquil, and moves about anywhere. It is a flexible, mindful mind.

The opposite type of mind---a mind which is 'afflicted' and 'lost'---is an ‘existent’, ‘confused’ ‘abiding’, ‘stopping’, ‘occupied’, ‘one-sided’, 'arrested' and ‘lost’ mind. Such a mind suffers from 'bias in one place,' having congealed and settled in one place. It is a rigid, mindless mind.

Here are some gems of wisdom from the book:

‘It is essential that the mind not be detained.’

'In not remaining in one place, the Right mind is like water. The Confused Mind is like ice, and ice is unable to wash hands or head. When ice is melted, it becomes water and flows everywhere, and it can wash the hands, the feet or anything else.'

‘The mind that becomes fixed and stops in one place does not function freely.’

‘Glancing at something and not stopping the mind is called immovable. This is because when the mind stops at something, as the breast is filled with various judgments, there are various movements within it. When its movements cease, the stopping mind moves, but does not move at all.’

‘The non-stopping mind is moved by neither colour nor smell.’

‘The mind that stops or is moved by something and sent into confusion---this is the affliction of the abiding place, and this is the common man.’

‘Therefore, one should engender the mind without a place for it to stop.’

‘The mind of attachment arises from the stopping mind.’

‘The mind that thinks about removing what is within it will by the very act be occupied. If one will not think about it, the mind will remove these thoughts by itself and of itself become No-Mind.’

Take this one for example. ‘It is like a ball riding a swift-moving current: we respect the mind that flows on like this and does not stop for an instant in any place.’

Then, there’s this graphic illustration:

To speak in terms of your own martial art, when you first notice the sword that is moving to strike you, if you think of meeting that sword just as it is, your mind will stop at the sword in just that position, your own movements will be undone, and you will be cut down by your opponent. This is what stopping means. 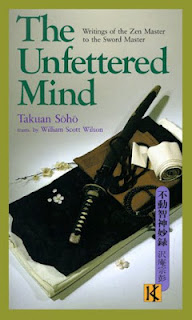 What about this one?

The meaning of the word seriousness is in holding the mind in check and not sending it off somewhere, thinking that if one did let it go, it would become confused. At this level there is a tightening up of the mind and not an iota of negligence is allowed.

This is like a baby sparrow being caught by a cat. To prevent a recurrence, a string is then always tightened around the cat, and it is never let go.

If my mind is treated like a tied-up cat, it will not be free and will likely not be able to function as it should. If the cat is well-trained, the string is untied, and it is allowed to go wherever it pleases. Then, even if the two are together, the cat will not seize the sparrow. Acting along these lines is the meaning of the phrase "engendering the mind with no place for it to abide."

Letting go of my mind and ignoring it like the cat, though it may go where it pleases, this will be using the mind in the way of not having it stop. 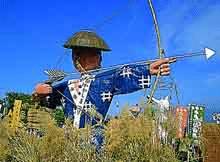 To make a scarecrow for the mountain fields, one fashions a human figure and puts in its hands a bow and arrow. The birds and beasts see this and flee. Although this figure has absolutely no mind, if the deer become frightened and run away, insofar as it has fulfilled its function, it has not been created in vain.

This is an example of the behaviour of the people who have reached the depths of any Way. While hands, feet and body may move, the mind does not stop any place at all, and one does not know where it is. Being in a state of No-Thought-No-Mind, one has come to the level of the scarecrow of the mountain fields.

To think, 'I will not think'--
This, too, is something in one's thoughts.
Simply do not think
About not thinking at all. 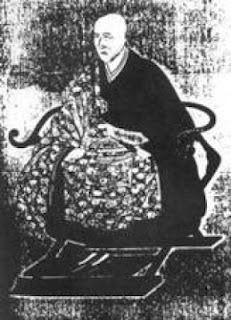 So, in order to be free of a ‘mind of attachment’, observe but don’t stay, look but don’t stop, be aware but don’t analyse, judge or condemn. In the words of Sōhō, ‘Make it a secret principle in either seeing or hearing not to detain the mind in one place.’

We always have a choice---at any moment. We can act mindfully---or mindlessly. One ‘way’ is correct. The other ‘way’ is not. The rightness and wrongness of each ‘way’ can be empirically tested by its consequences. It is as simple as that.

And the one thing that, more than any other thing, results in a 'stopping' or 'confused' mind is this---a misbelief that we are the innumerable false selves (the hundreds and thousands of 'I's' and 'me's') that wax and wane in our consciousness. Until we let go completely of this false self---and recognise that 'it' is not the real person each of us is---our mind will continue to 'stop' and be 'occupied' in useless, self-defeating ways.

There are many ‘ways’ but only one ‘Way’ as such, according to Sōhō:

While hands, feet and body may move, the mind does not stop any place at all, and one does not know where it is. Being in a state of No-Thought-No-Mind, one has come to the level of the scarecrow of the mountain fields.

There is no 'way' to that Way of No-Thought-No-Mind. The Way itself happens of its own accord---effortlessly---when we just let it happen.


Note. I am Zen-ing off to Japan in a few hours for a week or so. I will be back with you soon. In gassho, IEJ.

THE MINDFUL MIND OF NO-MIND