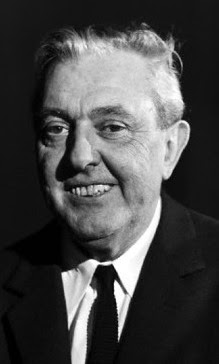 One of my all-time favourite films is The Vacances de Monsieur Hulot (Mr Hulot’s Holiday).

Let’s face it, the French filmmaker and actor Jacques Tati [pictured left] was a genius---and thanks to his immortalization on film, he is still is.

Every time I see this delightful black-and-white film, and I pull out and watch my DVD copy of the film at least once each year, I experience ‘not a comedy of hilarity but a comedy of memory, nostalgia, fondness and good cheer.’ Those words come from the eminent American film historian and critic Roger Ebert, whose review of the film is well worth reading. And these words of his also resonate with me:


When I saw the film a second time, the wonderful thing was, it was like returning to the hotel. It wasn't like I was seeing the film again; it was like I was recognizing the people from last year. There's the old couple again (good, they made it through another year). The waiter (where does he work in the winter?). And the blond girl (still no man in her life; maybe this is the summer that . . .).

They say nostalgia ‘ain’t what it used to be.’ Well, watch The Vacances de Monsieur Hulot. Then watch it again in, say, a year’s time. Then watch it again. The film’s ability to invoke and continually re-invoke nostalgia for a time and an era long gone, a time and era the majority of us never experienced, is almost unbelievable. Such is the greatness of film that the otherwise ephemeral incidents and occurrences depicted in the film are frozen in time and space forever---or at least for so long as there is a print in one form or another of the film ... or for so long as there is someone living who can remember at least one delicious frame of the film. 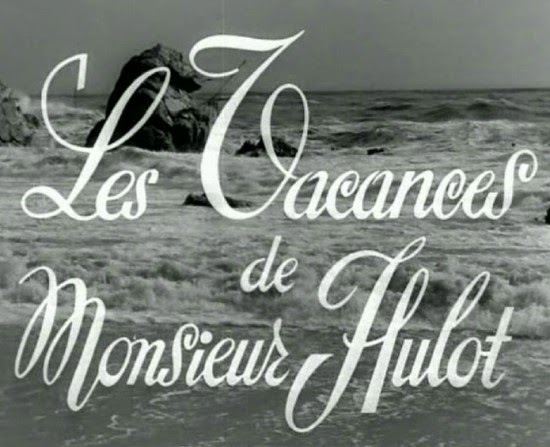 Except for some indoor scenes (for example, those set in the hotel's restaurant), The Vacances de Monsieur Hulot was filmed on location in the small, delightful coastal resort town of Saint-Marc-sur-Mer, on the edge of the industrial port of Saint-Nazaire. The seaside Hôtel de la Plage, which appeared as the holiday residence of Mr Hulot, still exists. The beach scenes were shot on Saint-Marc's beach, which is now known as La Plage de M. Hulot (‘Mr Hulot's Beach’). I've read that the tennis match took place in the garden of the nearby Château de Saint-Marc. Some say the tennis court has gone. However, the little cemetery into which Mr Hulot accidentally drove mid-funeral is still there, albeit now right next to a gymnasium. (For those who are interested, here are some 'then and now' photos.) 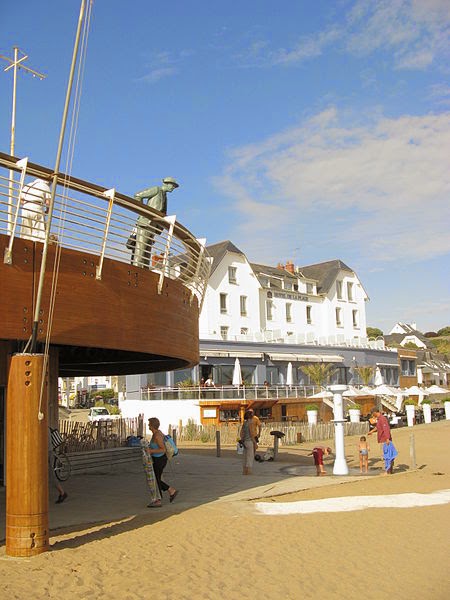 The entire film--like all of Tati's films---is nothing but a series of largely disconnected incidents and occurrences. One reviewer describes the film as 'a seemless succession of gently mocking studies of human absurdity.' So true. Part of the genius of Tati was his wonderful ability to preserve and capture on film the minutiae of the ordinary and everyday, in particular, the sights and sounds of the moment. Who, having once seen the film, could ever forget the ‘thwanking’ sound made by the door in the hotel dining room? Ebert writes:

Does it annoy Hulot, who has been placed in the Lonely Guy table near to it? Probably, but it is in the nature of the door to thwank, and we sense that it has thwanked for a generation, and will thwank until the day the little clapboard hotel is torn down to put up a beachfront gargantoplex.

Then there's that pipsqueak sound of Mr Hulot's car horn ... and the sound of the hotel bell being rung for lunch ... and the noise of the car tyre going flat, with a mourner at the funeral thinking it's the sound of himself farting. I could go on. Yes, Tati’s attention to detail was quite extraordinary. Now, if mindfulness is the practice of bare attention to, and choicless awareness, of the action of the present moment, from one moment to the next, then Tati, and the several films he made, are masterpieces of mindfulness. Tati and his alter ego M. Hulot look and see. They examine. They are aware---choicelessly so. As Ebert writes, ‘There is an almost spiritual acceptance in [Hulot’s] behavior; nothing goes as planned, but nothing surprises him.’ Things come and go, things happen---most especially to Hulot himself---and all is noticed and observed. No judgment is passed by either Hulot or Tati himself. Things speak for themselves. Anything can happen, and does happen. Most that happens is inconsequential to say the least. Nothing matters much at all, but ... well ... c’est la vie. Tati's comedy, for the most part, is delicate, good-natured, and carefully understated. He never sought the belly laugh but rather the wry smile of inner satisfaction and, most especially, the look and feel of self-knowing recognition. Ah, la vie est comme ça! Yet there is a certain 'bite' to the proceedings as Tati reveals to the world the eccentricities of various aspects of French middle-class life. (Not that most of it doesn't also hold up for the rest of us.) 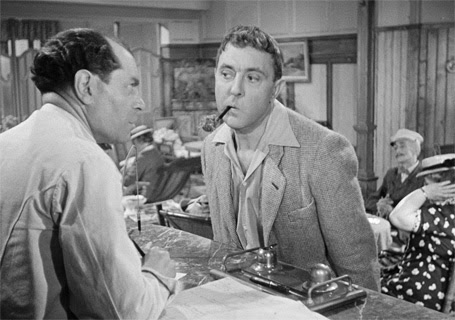 The French, perhaps more than any other people, understand the truth of that distinctly Gallic epigram, plus ça change, plus c’est la même chose ('the more things change, the more they stay the same'). They also know that although life is 'absurd,' that is, has no intrinsic meaning, the essence and joy of life is to be found in the charming inconsequentiality of the ordinary ephemeral occurrences of each moment of each day. Ah, c'est magnifique, ça! Mr Hulot's car backfires ... on several inopportune occasions. The doors of the bus close on a person's suitcase. A dog lies on its side in the middle of the road, sunbaking. Mr Hulot leaves muddy footprints in the foyer of the hotel. Later he fashions a hat from a newspaper. Another man is reading a newspaper. A naughty young boy on the beach uses the sun and a magnifying glass to burn a hole in the canvas of a beach tent. A young Marxist bores a pretty young lady. An middle-aged to elderly woman picks up seashells, one after the other, and hands them to her husband who looks contemptuously at each of them in turn before quickly throwing them away. Another man’s moustache blows upward in the draft. A cute little toddler tumbles, ice-cream first, into the sand. A man is constantly trying to tune a radio ... forever without much success. All si terriblement ordinaire, even absurd. Yet all si terriblement important, for such is life. 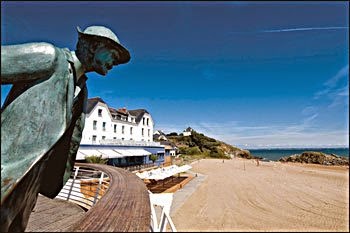 Mr Hulot throws himself into the content of the moment with an enthusiasm and an innocence that are almost childlike, even if it is to the annoyance of others of whom he is largely oblivious. He fails more often than he succeeds in whatever he does. Nothing ever seems to work out quite like it ‘should,’ except that there are no ‘shoulds’ in his world---nor ours for that matter---because everything is equally important and equally unimportant as every other thing. Everything is ordinary, and yet everything is also extraordinary. Everything matters because whatever is is what is, and there's nothing else. Yet nothing matters much at all, because all things change and all things will pass away. Only life---whatever ‘it’ may be---remains, for life is nothing other than living things living out their livingness from one moment to the next. Forms, including us, come and go ever so quickly. Life proceeds relentlessly onwards---mercilessly at best. 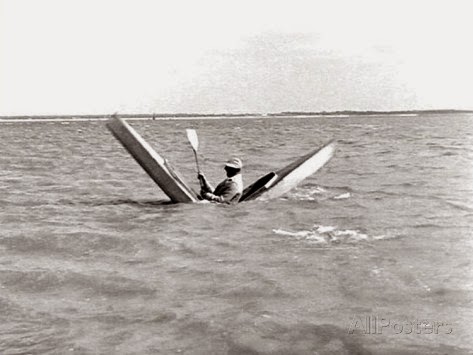 Yes, the joy of life is to be found in the minutiae of the ordinary and everyday. Don’t look for any deeper meaning or purpose. If you do, you will cease to notice and enjoy those little, ever-so-ephemeral little occurrences and moments of life that collectively constitute our brief time on this planet. The set of instructions at the opening of the film says as much:

Mr. Hulot is off for a week by the sea. Take a seat behind his camera, and you can spend it with him. Don't look for a plot, for a holiday is meant purely for fun, and if you look for it, you will find more fun in ordinary life than in fiction. So relax and enjoy yourselves. See how many people you can recognise. You might even recognise yourself.

Good advice. Don’t look for a plot in life, for life is meant purely for fun. Look for the extraordinary among the ordinary things of so-called ‘ordinary life’. And what is ‘fiction’? Well, fiction is someone’s version of what is. Fiction is interpolated and extrapolated meaning where there otherwise is no meaning. My simple advice to you is---forget the 'shoulds,' the 'oughts,' and the 'whys,' instead look and see, and observe and examine, and most of all enjoy, what actually is ... from one moment to the next. La vie est dans la salle. Angels, if there are any, can do no better.

Here's the film's trailer---well, one of them:


Now, go watch Les Vacances de Monsieur Hulot in its entirety. And you might even recognise yourself.


Postscript (1). I'm off to Saint-Marc-sur-Mer next week, and I'll be staying at, yes, the above mentioned Hôtel de la Plage. I will let you know what it's like---in the not-too-distant future. A bientôt. IEJ. November 12, 2014.

Postscript (2). I had a wonderful time in Saint-Marc-sur-Mer [see my various photos below, the bottom one showing the site of the former tennis court]. The town is as charming as ever. Most of the significant buildings that were there in 1951, when the exterior scenes of Les Vacances de Monsieur Hulot were filmed there, remain to this day. The hotel has been added onto, and revovated extensively, in the ensuing years but it retains much of its original quaintness and Gallic charm. I will be back. IEJ. November 29, 2014. 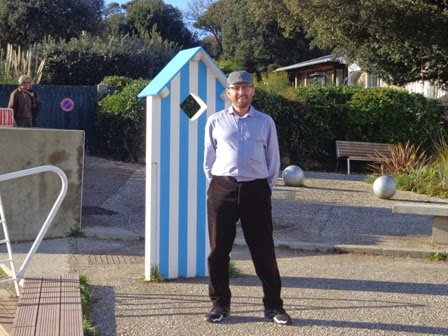 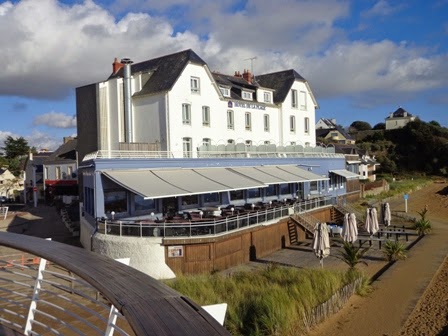 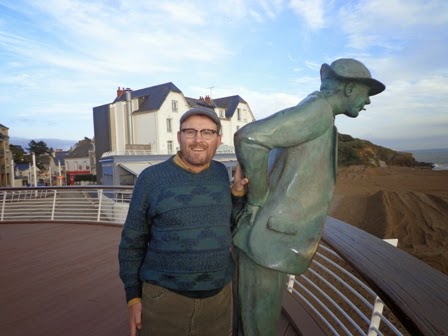 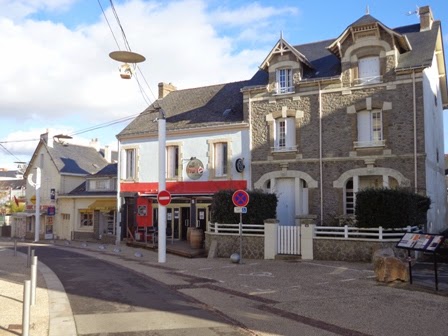 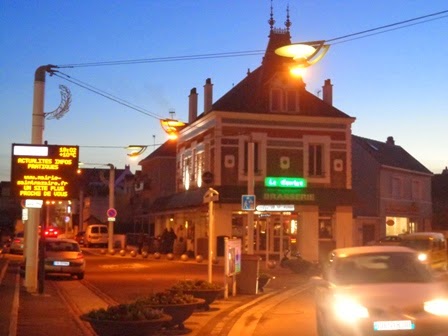 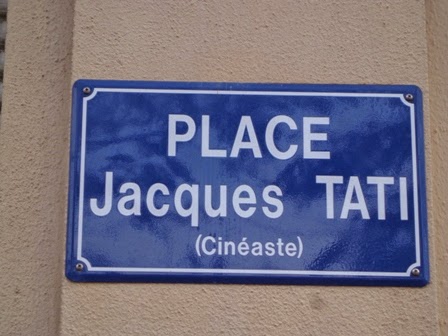 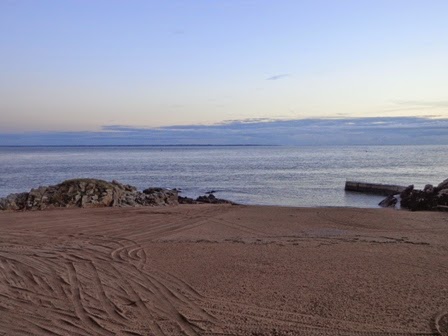 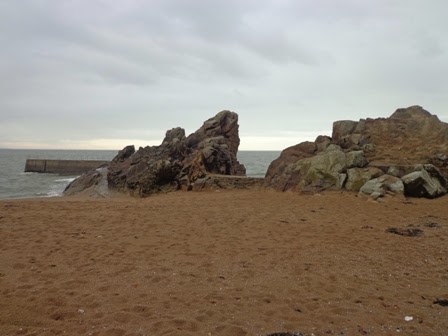 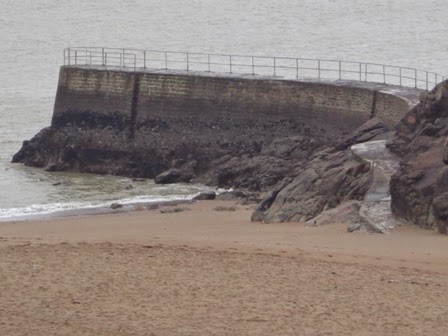 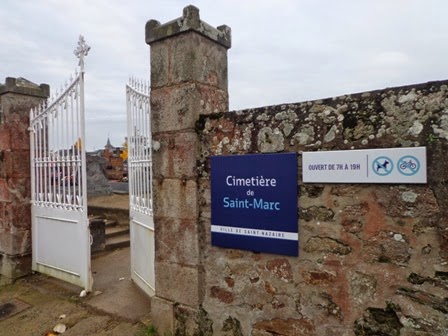 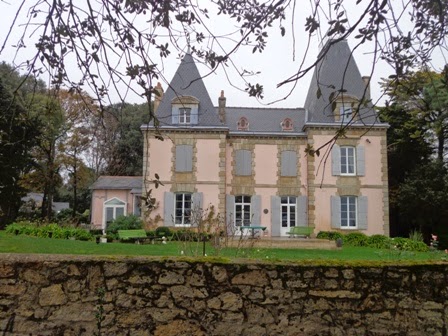 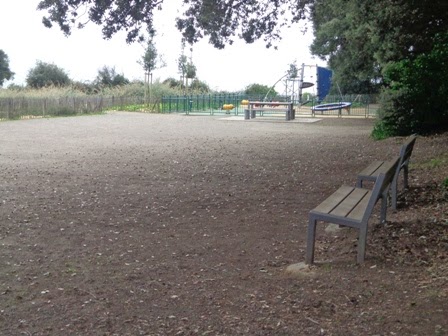 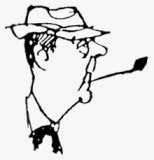