WHY WAIT FOR GODOT? 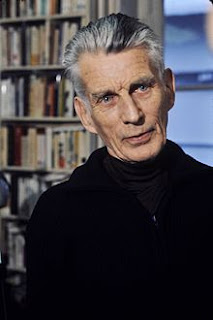 'You're on Earth. There's no cure for that.'

I have always loved the ‘Theatre of the Absurd’ (le théâtre de l'absurde), of which the Anglo-Irish playwright Samuel Beckett (pictured left), who lived most of his adult life in France, was one of its leading exponents.

En attendant Godot (Waiting for Godot) is Beckett’s most well-known play---famously described as 'a play in which nothing happens, twice.' The play is not so much a comedy as a farce---and a tragic farce at that. Vladimir and Estragon, two tramps who live in the 'shadows of existence,' are forever waiting for the arrival of the mysterious 'Godot.'

The tramps---'existential clowns,' they have been called---believe that Godot will in some unexplained way make everything different. Godot will give meaning and coherence to their miserable lives, and will relieve their metaphysical anguish. 'We are all born mad. Some remain so.' Just the thought of Godot’s supposed imminent arrival gives the two tramps some false comfort and relief from the existential absurdity and pointlessness of their condition. How very much like them are we!

However, Godot never comes. No surprises there.

The somewhat circular movement of the play is simply the action of ‘waiting.’ Thus, much of the dialogue in the play goes like this:

Beckett, when asked what he meant by Godot, said, ‘If I knew I should have said so in the play.’ The truth is Godot is whatever we ‘attach’ ourselves to when we are not living mindfully in the Eternal Now---that is, when we are 'waiting.' We all seem to be waiting for something---or someone. We may be waiting for our 18th birthday. We may be waiting for the weekend, for Christmas, for our next holidays, for our next sexual encounter, or for the Second Coming. It doesn’t matter. We are all like Vladimir and Estragon, who fail even at being nihilists. We will do anything but live in the Eternal Now. Silly people that we are---we wait. 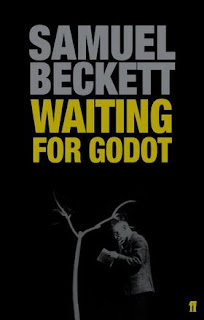 As I see it, Godot is the future. If we are 'living' (ha!) in the future---which doesn’t exist in any event---we are not living mindfully in the Eternal Now. That is a sure-fire recipe for utter hopelessness and futility---the ‘action’ (or rather inaction) of waiting. So many of us are like Vladimir and Estragon---ruined by the habit of inaction or of acting without one’s own initiative. There is not even the will to decide not to go on, that is, to end it all.


Estragon: What about hanging ourselves?
Vladimir: Hmm. It'd give us an erection.

There is only one way to live with purpose---even when confronted with utter hopelessness---and that is to choose to live mindfully in the Eternal Now. True, ‘There’s no lack of void,’ as Estragon says in the play, but if you face each moment with directness and immediacy by maintaining bare attention to, and being choicelessly aware of, whatever is the ‘content’ of each passing moment, from one moment to the next, your life will be meaningful and coherent---even in the face of an otherwise indecipherable cosmos.

'The only sin is the sin of being born,' writes Beckett. Be that as it may, don't wait for Godot to relieve you of the burden of being human---that is, the bondage of self. Godot never comes. Godot never turns up. Never has, never will. In fact, don't wait at all. Just live mindfully---in the Eternal Now---and you will be free of the bondage of self.

Postscript. Another of Beckett's plays, Krapp's Last Tape, explores the instability---indeed, illusory nature---of the 'self.' By means of a tape recorder, the elusive 'self' at one point in time (when Krapp is an old man) 'meets' its earlier---now seemingly unrecognisable---incarnation (when Krapp was some 30 years younger). Krapp's Last Tape is a delightful mixture of Buddhism and existentialism---despite what my hero Groucho Marx said about the play, namely, 'If you turn that title around you will have an idea of what I thought of that one.' Nevertheless, the absurdist Groucho had more than a few things in common with Beckett, not the least of which was a lack of belief in an afterlife. In the words of the one, the only Groucho, 'You only live once, despite what Jesus or somebody said ... Go out to the garden and tear a flower in four. It won't be a flower again.' There, what more proof could you need? Thanks, Groucho. IEJ.

WALKING IN THE ETERNAL NOW

THE MINDFUL EMILY DICKINSON AND YOUR IMAGINARY SELF-PICS