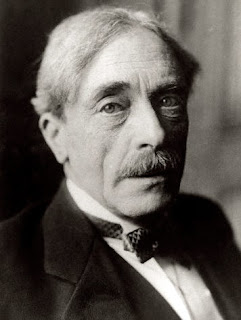 I don’t do it often, but I don’t dislike a walk through a cemetery. In fact, I find it quite enjoyable—up to a point. A cemetery is such a great place to contemplate the eternal and the unknown. Media vita in morte sumus. In the midst of life we are in death. Mors janua vitæ. Death is the gateway to life. Having said that, too much contemplation of death and the dead results only in a morbid and melancholy state of mind. Life is for the living. I say that with no disrespect for the dead.

French symbolist poet Paul Valéry’s famous 1922 poem ‘Le Cimetière marin’ (‘The Seaside Cemetery’ or ‘The Graveyard by the Sea’), set in the cemetery at Sète where Valéry [pictured] himself is now buried, is a sublime meditation on life and death. The poem is also a 'call for action', with the message (ugh) that life is for living now. The tension between being and non-being, between action and inactive contemplation, was a perennial theme of Paul Valéry ('At times I think and at times I am'), but in ‘Le Cimetière marin’ the poet, after coming to accept the inevitability of death, boldly proclaims the need to choose life and eternal change.

Valéry's deep reverence for life, even in the midst of a place of death, is palpable. The poet begins by describing a calm 'sea in flame'---a roof-like expanse of seemingly unending 'sea forever starting and re-starting' ('Quite that roof, where the doves are walking') under a blazing sun at noon. There is a tranquil state of ‘celestial calm’---‘palpable calm, visible reticence’---when ‘thought has had its hour’. Life is a ‘temple of time, within a brief sigh bounded’. For about three-quarters of the poem Valéry is lost in self-absorbed but numbed meditative contemplation---‘long vistas of celestial calm!’ Intimations of immortality, you could call it. However, his contemplation of the mystery of death (‘The dead lie easy, hidden in earth where they / Are warmed and have their mysteries burnt away’) morphs into a mindful awareness of the inevitability of death---intimations of mortality---notwithstanding the seeming endlessness of life itself (Break, body, break this pensive mould'):

Even as a fruit's absorbed in the enjoying,
Even as within the mouth its body dying
Changes into delight through dissolution,
So to my melted soul the heavens declare
All bounds transfigured into a boundless air,
And I breathe now my future's emanation. 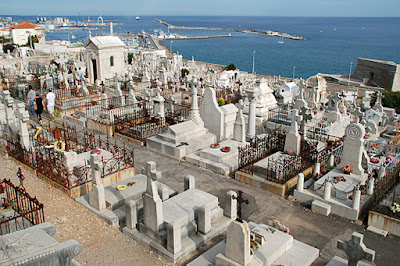 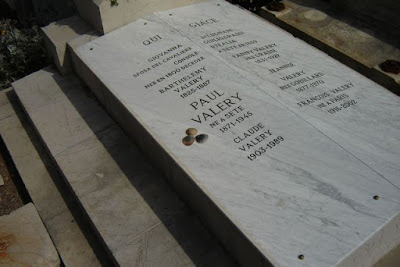 In time, however, the wind begins to stir and waves start forming on the sea. A new state of consciousness arises in the poet. Self-absorption gives way to conscious awareness and exuberance. Even defiance. True meditation---mindfulness—is not a state of reverie or contemplation of the ineffable. Valéry once said, 'In poetry everything which must be said is almost impossible to say well.' That is so true of life as well. Contemplating the ineffable tends only to result in existential angst and confusion. And forget about beliefs. The ever-skeptical and agnostic Valéry spoke well when he said, 'That which has been believed by everyone, always and everywhere, has every chance of being false.' Mindfulness is something altogether different; it involves no beliefs. It is an intense and intentional state of ceaseless change and action and not just awareness. Mindfulness is for the living, of the living, and is in the living of our days---all days, every day, and every moment of each day. Back to 'The Seaside Cemetery':

No, no! Arise! The future years unfold.
Shatter, O body, meditation's mould!
And, O my breast, drink in the wind's reviving!
A freshness, exhalation of the sea,
Restores my soul . . . Salt-breathing potency!
Let's run at the waves and be hurled back to living!

Yes, mighty sea with such wild frenzies gifted
(The panther skin and the rent chlamys), sifted
All over with sun-images that glisten,
Creature supreme, drunk on your own blue flesh,
Who in a tumult like the deepest hush
Bite at your sequin-glittering tail -- yes, listen!

The wind rises! . . . We must try to live!
The huge air opens and shuts my book: the wave
Dares to explode out of the rocks in reeking
Spray. Fly away, my sun-bewildered pages!
Break, waves! Break up with your rejoicing surges
This quiet roof where sails like doves were pecking. 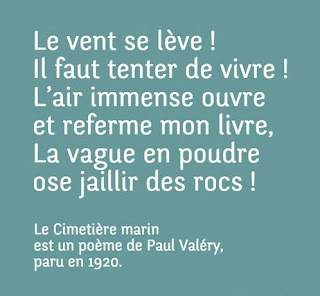 The movement of the poem---note, by the way, how the rhythm of the verses cleverly mimicks the sea's movement---has now gone full circle, with the doves in the opening line now transformed into white sailing boats. Doves fly high. Not so boats. Not so us. From intimations of immortaility to ones of mortality.

And what of the dead? Valéry refers to them as having been dissolved into a 'dense absence'. Not a mere absence but a 'dense' one. How can an absence be dense? When it is ineffable, unreachable and yet ever so sublime. Jesus is recorded as having said, ‘Why do you look for the living among the dead?’ (Lk 24:5) and ‘Let the dead bury their own dead’ (Lk 9:60). Have you lost a loved one? I lost my parents over 30 years ago and I still miss them. I seldom go to the cemetery where their cremated remains are buried. My parents are not there. I do not look for them there. They are to be found in the very livingness of life itself. I am reminded of some beautiful words from the collection of poems This, My Son by the Australian writer Joan Kinmont---words I've often read out at funerals, words that capture the essence of Paul Valéry’s poem: 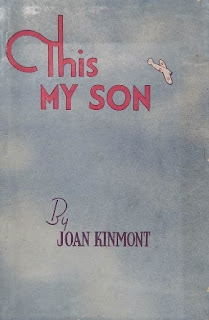 Mindfulness---like life itself---is not for day-dreamers. It is for those who want to live life fully and deeply for so long as it lasts. Mindfulness is not escapism. It is a non-judgmental, intentional awareness and experience of life as it unfolds from one moment to the next.

'The best way to make your dreams come true is to wake up.' So wrote Valéry. When asked about his enlightenment the Buddha is reported as having said, 'I woke up.' That, my friends, is what mindfulness is all about---waking up ... and staying awake.

Yes, the wind rises! We must try to live!

And if we live mindfully, that’s even better.

LIVING IN THE NOW WITH FRENCH POET JACQUES PRÉVERT

WHAT WE CAN LEARN ABOUT MINDFULNESS FROM CHARLES BAUDELAIRE

MINDFULNESS ACCORDING TO WILLIAM WORDSWORTH

ALBERT CAMUS’ GOOD ADVICE ON LIVING FOR THIS PRESENT MOMENT

THE EXISTENTIAL ANGST OF OUR BEING BOTH OBSERVER AND OBSERVED 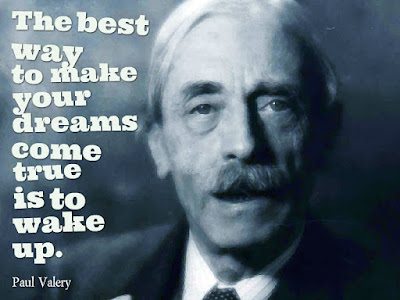